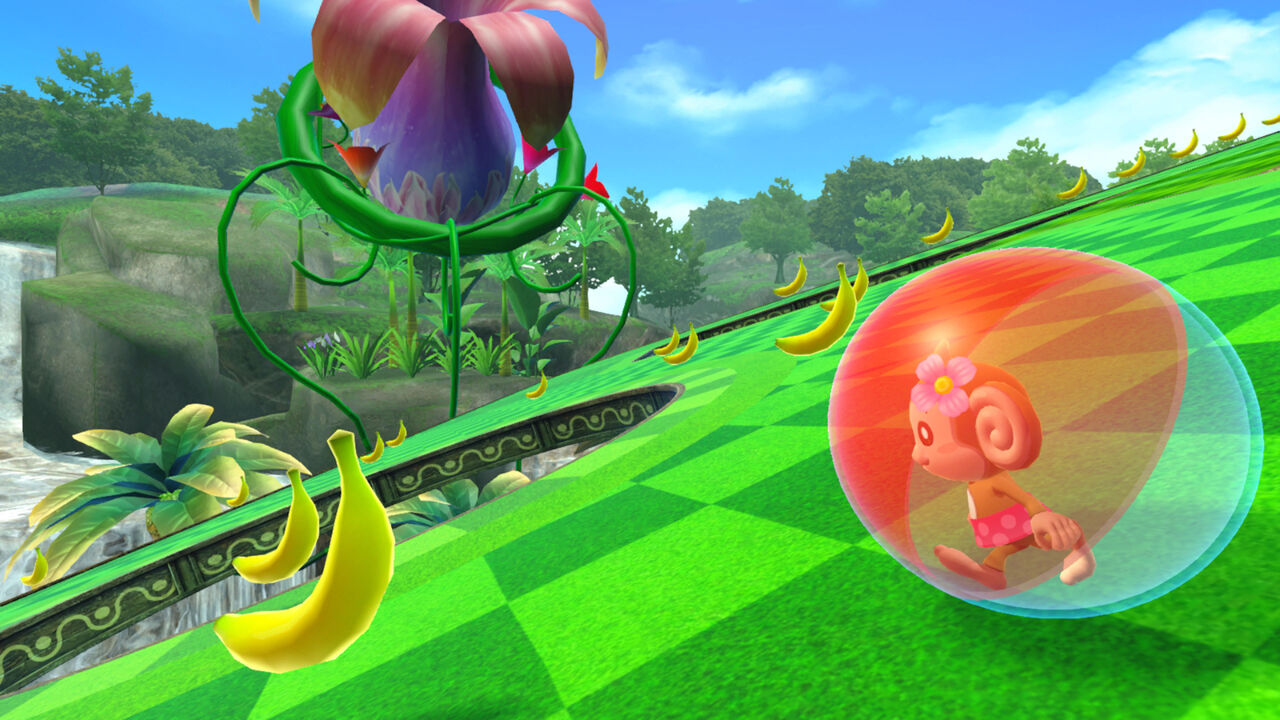 What's on your mind?

P.S. I just also want to say that it has been a lot of hard work doing all this for the wiki, but it has been so worth it!! Since other wikis have animation pages, like Smash Wiki, Super Monkey Ball Wiki definitely deserves to get the same treatment!!

Today, June 23rd 2021, marks the 20th anniversary of the release of the first game in the series, Monkey Ball, in the arcades of Japan! Here's to many more years of rolling down devious courses and collecting delicious bananas! 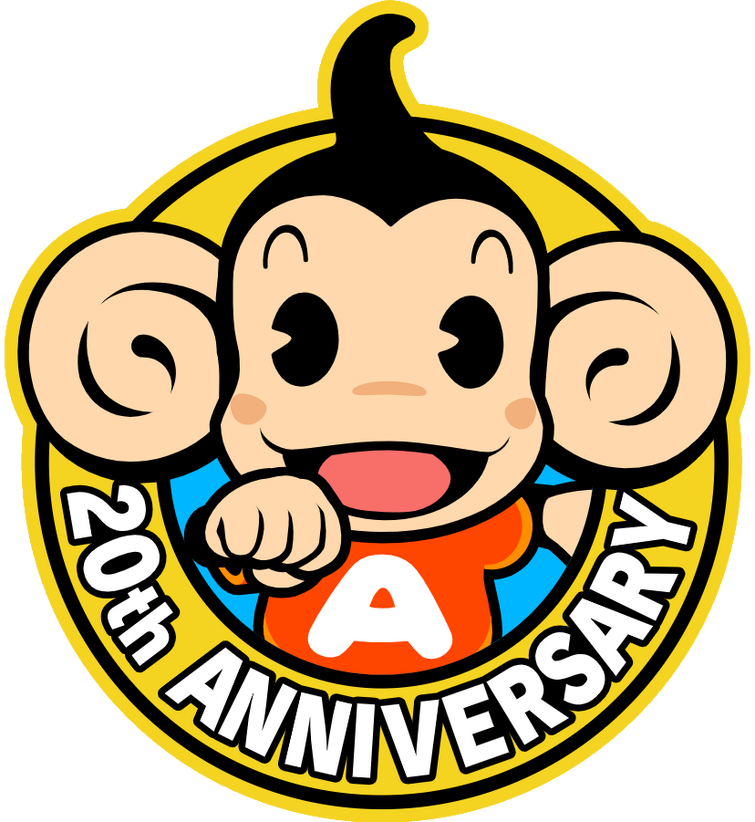 This is probably one of the few reveals I’m interested in, I’m most Likely gonna get it. Playing through an updated level design of the original trilogy is gonna be fun, plus you can play as YanYan and Doctor along with the original four. This has a good amount of variety for old plus new fans of the series.

Can’t wait to play as the six characters, the original courses, the 4player co-op mode, and the original mini games. What about you guys?

I find it pretty interesting that in Super Monkey Ball titles including: 1, 2, Deluxe, Banana Blitz (Wii version only), and Step & Roll: Multiplayer Modes allow up to 4 players to choose the same character with each of 'em having a palette-swap matching their port-color!

SMB1, SMB2, and SMBDX always uses each character's default color-scheme on a Red ball (or Green in certain cases with single-player mode) even if they don't look red, (hence their similar colors such as COM5 Baby and COM6 MeeMee in SMB2 & Deluxe uses a different tone or hue of their clothings,)

Honestly, I feel underwhelmed that GonGon's G on his shirt is always white.

I have mixed opinions about adding more unique characters to SMB since I don't mind just the four we already have, YanYan's not a real monkey, I jokingly nitpick about Jam's name not being JamJam, and Jet feels too oddly different to be part of their monkey's main tribe. No getting me started on Doctor and the entire SMBA cast, though.

This is just a situation regarding how much i'd love having to repeat who in a 24-player Monkey Race (be it 4, 6, or 8 different characters, for a repetition of 6, 4, and 3, respectively).

Now that I got those disclaimers out of the way, I can finally discuss colors regarding players 5-8 or higher: Unlike Players 1, 2 ,3, & 4, the color-codes of COMs 5, 6, 7, & 8 has been pretty inconsistent from style to style in the SMB franchise, those official versions including:

Classic Monkey Ball era: Cyan, Magenta, Black, and White. (for a bonus, 9 and 10 would be Purple and Lime, realized this thanks to a comment I read in Monkey Race 2's article)

SMB Adventure: Orange, Cyan, White, and Purple (although no 2+ players can choose the same character, monkeys don't change colors at all in SMBA, and strangely, all their balls are cosmetically red, despite their UI's displaying unique colors).

For the sake of not making this message longer than it has any right to be, i'll conclude it with 2 & half more important things to mention!

Firstly, i'd love for multiple Party Games in Super Money Ball to allow 8 players rather than just Moneky Race limiting them to 4.

Secondly, I hope it's possible to come up with unique voice-clips & animations emanating from what place they got (with more than 4 sets of positions).

Lastly, a modification of MKWii had inspired me to imagine having 24 players in Monkey Race only! In here, i'd make the podium-scene have 8 X-axis spaces in 3 Z-axis spaces, and i'll finally conclude this thread's description with the only part that sounds really fun in my opinion, being what colors would I choose for 24 players in Monkey Race if I were to work at Sega?

Well to be clear, their character's recolors will be as faithful to SMB2's pattern as possible, and with that out of the way, the colors would be:

I'm not sure if this is the most suitable channel for something like this (I can't find a "meme" or "fun and games" channel for instance). If one does exists, please let me know.

This was an iceberg (the third version) I made for Super Monkey Ball. I've posted it to Deviant Art and Reddit and I figured I'd post it here too. 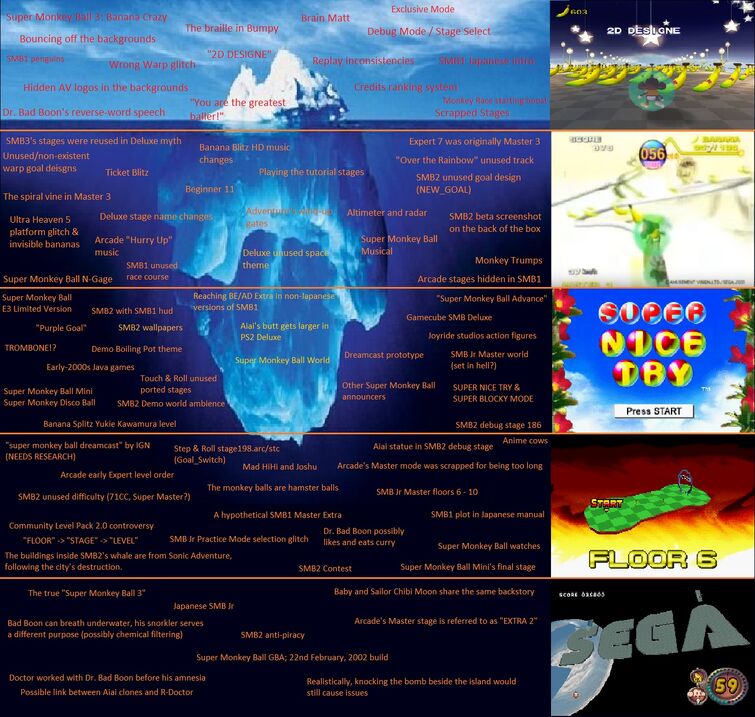 I've added this link connecting to the original Super Monkey Ball to get a credits section of wiki pages started.

Can somebody set up a Discord widget to the Monkey Ball server?

I do not have permissions to do that.

Hi, everyone, I am working on editing Super Monkey Ball: Banana Blitz Party Games articles since a lot of them are lacking sufficient information. Anyway, if anyone could help edit them, that would be excellent!

Also, I am not as familiar with the Super Monkey Ball Adventure Podium Animations, so it would take me a bit longer to add in those since I would have to find them. Anyway, if anyone could help edit them, that would be fantastic!

(NOTE: I may be looking too far into this)

Tbh I have always been confused that literally every female playable character (basically 4) have a crush on Aiai and it´s kinda weird to me. I get that W-Meemee and P-Yanyan are doubles and it´s in canon that they like him but? I see them as separate characters and not costumes? (That´s one reason I ship W-Meemee with F-Gongon). The other funny thing about Aiai is that I have seen a lot of anime related YouTube videos talking about how in anime the protagonist is usually the average/normal male who has pretty much all the girls in love with him. That male is Aiai now. it´s actually really funny knowing that our main protagonist is the new Makoto Naegi. That or I´m looking way too deep into all of this.

I´m actually kind of curious to see what others think...

I am really hoping that people will edit their own pages, edit other people's pages, and edit my pages. There is a lot to edit.

I will currently be re-doing the outdated homepage for the SMB Wiki, dedicating it to news, events, and helpful links. Plenty of pictures will also be added! Please go to its Talk page for discussion.

This is the place to talk about your favorite topic, to share news, theories, ideas, and to connect with others. The content from your Forum has been converted to Discussions posts, so nothing has been lost.

To learn more about what you can do here, check out community.wikia.com/wiki/Help:Discussions

If you're an admin on this community, read more about how you can customize your Discussions and set up guidelines for contributors: community.wikia.com/wiki/Help:Admin_and_Moderator_Tools_in_Discussions