For the other logo stage, see Sega Logo.

This stage is in the shape of the Amusement Vision logo. The floor constantly tilts back and forth. There is a banana bunch in the center of the "A," and the goal is in between the "V."

Move forward once the floor tilts towards you. Then, make your way to the back, and turn around to the right, and roll into the goal. Since the floor is constantly wobbling, be very careful guiding the monkey to the goal.

Due to Amusement Vision becoming defunct in 2005, the stage is instead in the shape of two bananas, with the goal moved closer to the top edge. Corresponding to this redesign, it is now called "Banana Plate." 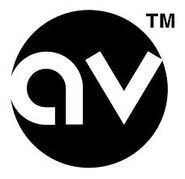 The Amusement Vision logo, on which this floor's shape is based

Animated simulation of the AV Logo (sans the starting platform)
Community content is available under CC-BY-SA unless otherwise noted.
Advertisement