For other uses, see AiAi (disambiguation).

AiAi bears similar resemblance to a barbary macaque. He has a short stubby tail, brown fur, and wears an orange T-shirt with the letter A on it. Starting with Super Monkey Ball: Banana Blitz, he wears a backpack.

AiAi is a long-time resident of Jungle Island. There, he resides with his wife MeeMee and son Baby. He is given his magical powers starting in Super Monkey Ball to try and make it to Banana Island before GonGon, who is AiAi's rival at the time, does. By the time Super Monkey Ball 2's events occured, he and AiAi are best friends and the four stop Dr. Bad-Boon from stealing all the bananas.

He is a carefree monkey who loves bananas, almost more than MeeMee. When someone is threatening the peace, he is always the first to spring into action.

AiAi is the leader of the team. He leads his friends into great adventures, usually for the sake of bananas. In Super Monkey Ball 2, AiAi and his friends try to stop Dr. Bad-Boon from stealing all of the bananas from the residents of Jungle Island.

AiAi has a very major role in Story Mode in Super Monkey Ball Adventure. Not only is he the main character and has the most motivation to bring happiness back to the 5 kingdoms, he has another new appearance as Future AiAi. He time traveled back in time with Baby to the present day and shares helpful chants to the player, similar to the magical spell Ei-Ei-Poo, using the words Yay, Woo, Poo, and Ei. Like Baby in Super Monkey Ball: Banana Blitz, Future AiAi takes on a more futuristic appearance, wearing a yellow robot helm and red jumpsuit with a yellow star on his chest.

In Banana Blitz's story, he, along with the other monkeys, tries to get the eight golden bananas back from the Space Alien Pirate King.

Super Monkey Ball 2 official Japanese website (translated):
"I love bananas and think about them every day. Bananas will overcome any difficulties cheerfully. With the casting of the magical spell "Ei-Ei-Poo!" I will go out on an adventure with a monkey ball."

Super Monkey Ball 2 instructions booklet:
"The hero of this game. He loves bananas so much that he always spends his carefree life thinking "The banana I had today was really delicious." Eat bananas, and he'll be in high spirits, able to overcome any hardship. Chanting a magical spell "Ei-Ei-Poo," he starts his adventure with Monkey Ball."

Super Monkey Ball Deluxe / Touch & Roll websites:
"AiAi, monkey hero, happy husband to MeeMee and father to his baby boy aptly named Baby. Being a hero, AiAi is naturally accomplished in his monkey ball - fast, nimble and not too light."

Super Monkey Ball: Touch & Roll instructions booklet:
"A high-spirited monkey who just can't get enough bananas. He can be scatterbrained at times, but he is very reliable when it counts."

Super Monkey Ball Adventure instructions booklet:
"AiAi is the hero of the game, and keeps the Super Monkey Ball team together. He is courageous and daring and the brains of the operation."

Super Monkey Ball World:
"As the main monkey in the Super Monkey Ball series, it's up to Aiai to stop Dr. Bad-Boon from turning back time so he can steal his wife! When he's not defending Jungle Island, he loves to eat bananas and play with MeeMee and his baby boy."

Super Monkey Ball: Banana Blitz instructions booklet / Step & Roll website:
"The monkey who just can't get enough bananas, he spends his carefree life thinking about them every day. In fact, he's willing to take on any difficult adventure for the sake of bananas."

Super Monkey Ball: Banana Blitz website:
"He has a good time wherever he goes, especially if there are bananas to be had! He lives happily with his wife MeeMee, and their baby boy on Jungle Island. He's perplexed and surprised by the flirtations of a cute new neighbor named YanYan."

Super Monkey Ball: Step & Roll instructions booklet:
"Aiai is an easygoing monkey. Now that peace has returned, he doesn't have to take on difficult adventures for his favorite bananas...Umm, hasn't he been getting a bit out of shape lately?"

Super Monkey Ball 3D website / in-game description:
"A lover of bananas, he leads a laid-back life while dreaming of the yellow fruit. He is not afraid of any adventure if bananas are involved."

"Punch your way to more bananas!﻿" 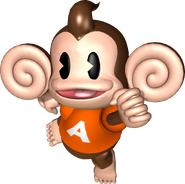 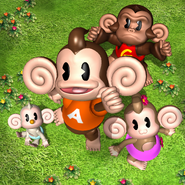 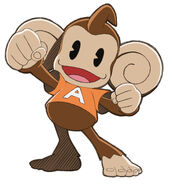 AiAi as seen in official artwork for Sonic Riders

AiAi has appeared in video games alongside Sonic the Hedgehog and other Sega characters. Most of the time, he is playable from the start.

Sonic Riders
AiAi appears in Sonic Riders as an unlockable character. He is a Power type character and rides on a banana-shaped board. For special moves and others, sometimes he will roll around in a green monkey ball.

Sega Superstars
AiAi is playable from the start and has his own minigame based on gameplay from Super Monkey Ball, getting to the end before the time runs out.

Samurai & Dragons
AiAi is one of the many Sega characters who made a small cameo appearance in the game as a card.

Yakuza 5
AiAi, along with MeeMee, Baby, GonGon and several other Sega characters, made a small appearance in the action-adventure/beat-'em-up game Yakuza 5, as a crane game figure.[1]

Sega Slots
AiAi and friends come to the mobile game Sega Slots and host their own versions of slot machines. They are teamwork-based and you can select from AiAi, MeeMee, Baby, or GonGon to get some major jackpots. The app was discontinued February 27, 2018.

Sega Heroes
AiAi returns as a playable character, unlocked very early in the game. He is a yellow hero and his special attack both attacks and heals the team. Other Super Monkey Ball appearances include MeeMee, Baby, GonGon, and Banana Thieves as enemies.