Unlike Advanced and Expert, Beginner stages rarely utilize puzzles or advanced mechanics, focusing solely on giving the player a chance to learn about and practice the game.

Most incarnations of the Beginner level contain ten stages, one of which is a bonus stage.

In Monkey Ball, all of these stages take place in the Sky, with the exception of the bonus floor and extra floors. In Super Monkey Ball, the first four floors instead appear in the Jungle.

The parentheses contain the name of the level in Super Monkey Ball Deluxe. 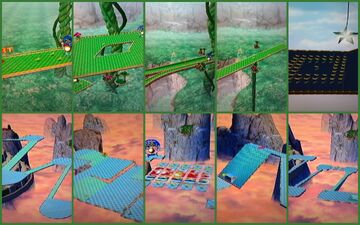 These floors are unlocked after clearing the above floors without without losing a life.

In both games, these stages are located in Space.

These floors are unlocked after completing the above stages without using a continue. The first five stages are located in the Space Colony, while the final five are located in Dr. Bad Boon's Base.

Super Monkey Ball Jr. contains ten normal floors and three extra floors. Most stages are simplified versions of Beginner stages from Super Monkey Ball, but there are some that are distinct or out of order, most notably in the extra stages.

The stages use the same backgrounds as their Super Monkey Ball counterparts.

These floors are unlocked after clearing the above floors without using a continue.

Names in bold are stages that are exclusive to Deluxe.

Beginner in Super Monkey Ball Adventure contains twelve stages, all of which are playable in Story Mode and are set in the world Jungle Island. There are no bonus or extra floors.

Beginner in Super Monkey Ball: Banana Splitz contains ten stages. There is one bonus floor but no extra floors.

All stages are set in the world Monkey Island and contain no extra stages. All ten of these stages are remakes of stages from previous entries in the series.