Duv d'Duv is a character seen in Super Monkey Ball Adventure. He resides in Zootopia.

Duv d'Duv is a magician whoe has brown fur and white skin. He wears your typical magician's outfit along with a top hat and magic wand.

Duv d'Duv's Assistant has been cut in half and Duv d'Duv was unable to put her back together. It is up to you to help Duv d'Duv put on a magic show the right way. This requires many chants, some only obtainable later in the game, so it would be best to put this mission off for some time.

Use Scalarball and grow your ball when Duv d'Duv tells you to do so.

Use Invisiball to turn yourself invisible.

Go behind the audience and end Invisiball.

Use Invisiball again, and go back onto the stage.

With the help of the torches, use Woodball and catch on fire.

Use Hoverball and levitate onto the stage (don't move, the chant will do the rest).

“Duv d’Duv’s favorite trick is ‘sawing the monkey in half’. He hasn’t yet mastered the part where he puts them back together and is always on the lookout for new assistants.” 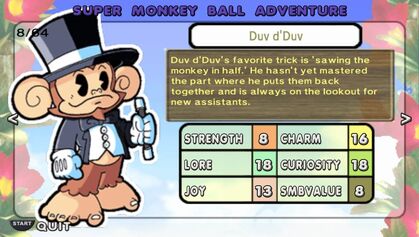 Duv d'Duv has fairly good stats, but lacks in Strength and SMB Value.