Foreman Ru'fus is the main leader of Moonhaven. He is seen in Super Monkey Ball Adventure.

Ru'fus is a big monkey with purple-brown fur on his body and black fur on his face with white skin. He wears a blue work shirt and yellow hard hat and wears a watch on his wrist.

Ru'fus looks over all of Moonhaven. He is quite proud and full of himself, as he believes the Big 'uns have everything under control. However, when all the Big 'uns get tired the Super Monkey Ball Team show him how Little 'uns really can lend a hand to help and the Automatons were sent to help as well. Before, he could not go to the wedding because of his busy schedule, but after the help from the Little 'uns, he happily accepts the invitation.

In order to do Ru'fus's mission, you need to gather at least 60 Joy first.

Help! The Big 'uns have all gone to bed or quit and Ru'fus is the only one still up! Something has gone haywire and it's up to somebody to fix it. How will you do it? With Little 'uns. Go back to the center of the park and you will see a bunch of small monkeys similar to Eee'nee in design. Go up to one of them and wait until they balance on top of your ball. Being each of them to one of the four levers around the park. When brought to them, they will jump up and down on it.

“Ru’fus enjoys his job on most days - as long as management stays away as they make his job even more difficult when they can’t make up their minds. He’s very good at problem solving, and a wizard at crosswords!” 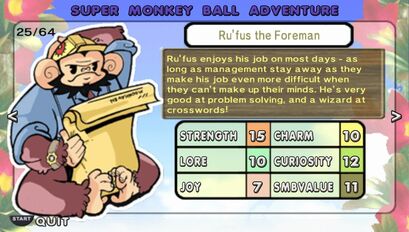 Ru'fus has fairly good stats, but lacks in Joy.