For other uses, see AiAi (disambiguation).

Like his present self, Future AiAi has brown fur and white skin. He is significantly taller and older than AiAi and wears a different attire than him, a robot-like style with a yellow helmet and antenna on top and a red jumpsuit with a star on the chest.

Future AiAi can only be obtained in the PSP version and is able to be transferred to the PS2 version through data transfer.

Future AiAi comes to aid the player, giving him or her useful chants to use during missions and placing Wing Rings throughout the lands (Mermer being a witness). He appears in the final cutscene, revealing his true self and the real reason why the monkeys have balls.

Chants are special powers the player learns throughout Story Mode from Future AiAi. The following is a list of chants Future AiAi provides:

Chants are performed with four dance moves, Yay, Poo, Woo, and Ei. The following are the combinations for each of the chants listed above: 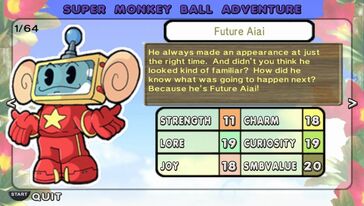 “He always made an appearance at just the right time. And didn’t you think he looked kind of familiar? How did he know what was going to happen next? Because he’s Future AiAi!”

Future AiAi has some of the best stats in the game, but is only average in strength.

Just what are you doing, AiAi? You are on camera!

Loading screen used when Future AiAi warps away from Moonhaven.

Loading screen used when Future AiAi warps away from Zootopia.

lLoading screen used when Future AiAi warps away from Monkitropolis.

Future AiAi starts the game with all the spells except for the warp spells.