This stage is a short, straight platform with two perpendicular platforms and an ending platform. There are large ellipse-shaped spheres for each horizontal platform. There is a play and a fast-forward switch on the starting platform. When the level is played, the "hoppers" alternate between lifting one side that was down previously and lying flat.

The only goal in this level is a blue goal. The blue goal is considered somewhat easy. Dash backward to the end of the starting platform, and hit the play switch. Then, go forward onto the straight platform. Wait for the hopper to hit the floor, and then dash forward. Do the same with the next, and then dart into the goal.

In the Jungle Island variant of this stage, you can dash forward to the goal without stopping. You cannot do this in the Volcanic Magma variant because the distance between the player's starting position and the first hopper is different between the two. 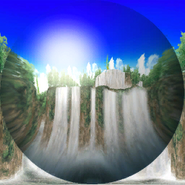