After climbing the first slope on the left, back up on the platform and run off the front edge with speed. Continue running towards the gap, and you should be able to clear the gap, albeit bouncing off the edge after the gap. Turn right at the first opening in the blocks after the gap. Roll up the slope, and turn right at the second opening in the blocks on the right. Roll up the slope and from here follow the normal route. 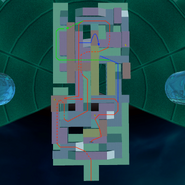 2 of the possible routes for completing the level.
Community content is available under CC-BY-SA unless otherwise noted.
Advertisement