For the mobile game from 2014, see Super Monkey Ball Bounce.

This Party Game involves up to 4 players at once bouncing on a floor and turning the squares into its corresponding color, with items available for benefit. Within a minute, the winner is the player with the most squares turned.

The only control you have over your character is where it lands. You are constantly bouncing on the board, and every blank tile will be claimed by you if you land on it. Claim the most tiles to win.

Comparing the three versions, the PSP boards have a slightly different appearance than the GC and PS2 version, which have an identical one. 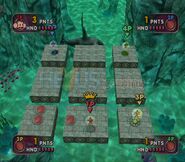