This World is a 19th-century city in the sky. It is made up of pure engineering, and is in constant need of stability from the Big'uns. It is a floating city, hidden in the sky so not very many monkeys know about it. Instead of winches, Moonhaven uses elevators to get your monkey from place to place.

As soon as the Super Monkey Ball Team enters Moonhaven, they are greeted by Eee'nee, who frantically tells them immediately to report to Foreman Ru'fus as the Automatons have run all out of control. When invited to the royal wedding, Ru'fus rejects it, as he says he and the Big 'uns need to stay and keep everything under control.

However, later he is desperate for help once the Big 'uns all leave work or get too tired. AiAi and friends than prove how Little 'uns really can make a difference in work, and Ru'fus accepts the wedding invitation.

Once you get 100 joy, it is discovered the Automatons were actually put in Moonhaven to help the citizens, all the engineering and work put in for nothing, supposedly. Ru'fus decides it's time to build a new Moonhaven, and sees the city in a different, better view. 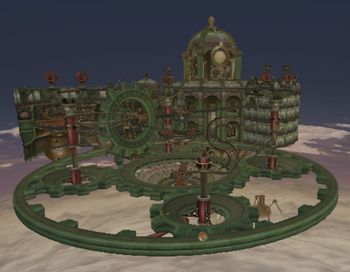 Paipai is located on the opposite side of Sisi by the cannon to the Air Automaton.