Pospos is a character that appears in Super Monkey Ball Adventure exclusively. He is the mailmonkey throughout the 5 kingdoms.

Pospos is the delivery boy. He is seen throughout Jungle Island, Moonhaven, Zootopia, Monkitropolis, and Kongri-la. Most are for getting everyone together for the wedding of AbeABE and Dee-Dee, the only one not associated with the wedding being for Dada. He has light brown fur and white skin and wears a generic mailman outfit. Rather than using envelopes, mail is brought to monkeys via balloons.

He has trouble remembering names, so it is up to the player to determine exactly whom he is talking about.

Pospos has 5 missions throughout the game. They are the following:

Pospos has his own trump card with fairly average statistics. 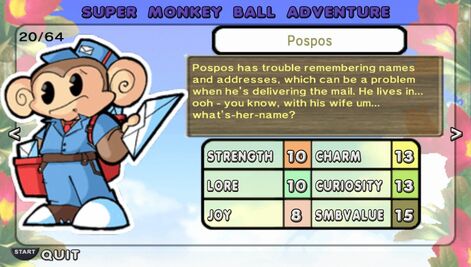 “Pospos has trouble remembering names and addresses, which can be a problem when he's delivering mail. He live in... ooh - you know, with his wife um... what's-her-name?"