For the stage in Super Monkey Ball 2, see Planets.

This stage features a bridge that is fairly long at the beginning. Off the side of the end of this bridge is a hemispherical object. There are more of these types of objects coming from this object in a shallow staircase. There are segments removed from these objects, leaving flat tops on them. The flat tops decrease in size from the beginning to the end. The goal is located on the final object's flat top.

To get to the goal, roll across the bridge at the beginning. Then, roll off and onto the first hemispherical object at a fairly fast speed. Don't lose your speed once you have rolled onto the first object; and go at a moderate speed, to where you can land on each object once as you make your way down. Once you have landed on the second-to-last object, try as hard as possible to go directly through the goal's ribbon as it is very hard not to bounce off and fall out if you don't. Do this by still going at a moderate speed but with maybe having to adjust slightly with your best judgement. 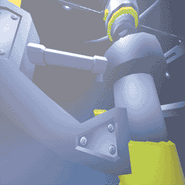 Stage overview with the reflection texture applied to the hemispherical objects
Community content is available under CC-BY-SA unless otherwise noted.
Advertisement