The Royal Guards are characters seen in Super Monkey Ball Adventure. They are seen throughout the Tree Palace in Jungle Island.

The Royal Guards work for King Junjun and are looked after under Gargar. They have brown fur and white skin and wear a classic knight uniform and carry a yellow flag with them. They wear a grey helmet that covers their eyes.

The missions the Royal Guards hand out aren't necessarily missions as they don't give Joy, but instead more like helpful tutorials on how to use certain game mechanics.

“Always alert to danger the Royal Guards taste the king’s food to make sure it isn’t poisoned. Last night they tested all of his wine but you'll never catch them taking a nap.” 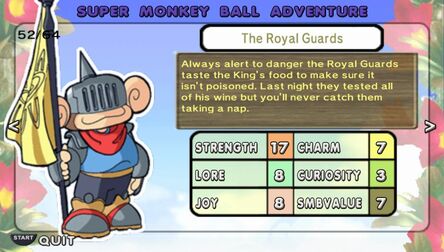 The Guards have average stats, but have very good Strength.